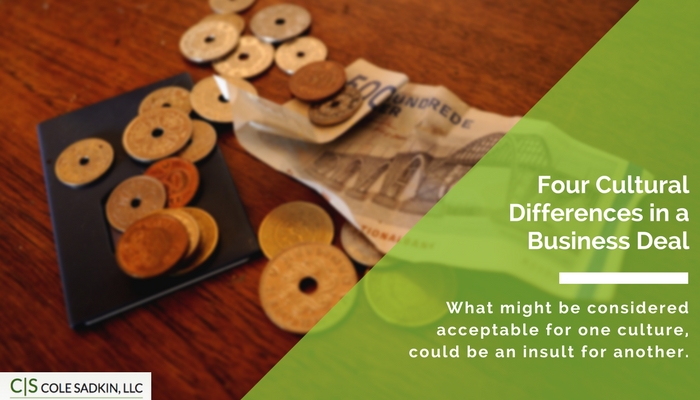 Posted at 01:01h in Starting a Business by Cole Sadkin 0 Comments
0 Likes

When negotiating a business deal with an international client, it is important to remember not only that you are working with people from a different country, but also a different culture. Cultural differences include how people act, think, dress, etc. What might be considered acceptable for one culture, could be an insult for another. In America, a weak, limp handshake signals lack of confidence, whereas in South Africa it is a sign of respect. If you are planning to negotiate with an international client, be sure to research their specific cultural association. Here a few ways culture can affect your business deal:

There are two types of business cultures to which dealmakers should be aware: task-based culture and relationship culture. Some cultures, like the U.S., are task-based; we expect the outcome of a business deal to solely be a signed contract between two parties. Other cultures, like South Asia, would rather have a relationship develop and have the contract be a mere formality. Discussions and negotiations can often seem oblique with this type of culture. Decisions are not always made in a meeting but rather may be cemented before or after.

Silence is not Always Golden

Do not automatically assume that others agree with your deal just because they are silent. Depending on the culture, some people might not directly disagree with a position out of respect. Others will verbalize their opinion. Americans tend to be straightforward and direct with their responses. In Japan, businesses take a more indirect approach when communicating. They place a higher importance on body language and paraverbal communication. It is important to take these differences into account and learn how to cope if you plan on making a deal with them.

Some of us have heard the phrase “time is money” so much so that it is practically our life motto. Americans naturally like to get things done quickly, whether it is a signing business contract, running errands, or getting coffee at Starbucks. Modern technology has allowed us to get things done with a touch of button. We are programmed to need instant results. Southern Europeans do not hold timeliness and punctuality to the same standard as Americans. Basically, Spaniards and Italians have the clock work for them, not the other way around. When interacting with foreign cultures, do not allow your time-centered focus to impede your ability to gauge the relationship.

Team Effort or One Leader

In the U.S., the authority to negotiate a deal is usually given to an individual. Whereas some cultures, like in China, a group consensus is more common. It is likely that Americans would show up to a meeting with only one or two decision makers, and the Chinese would show up with at least ten to make a deal. There are pros and cons to both organizations. Some cultures find the one-leader organization to have the ability to get things done quickly; but they are not as informed. Others prefer a team effort in order to gain different perspectives and for a well-thought-out decision; but this may be a much longer process.

Negotiating a deal with an international client takes a lot of preparation and research. Culture can affect the process of a business deal. It is important to acknowledge different business-making styles and traits in order to achieve a negotiation. This may even help you gain a new perspective for your own business culture and of the business world. If you are planning to work with a foreign client, make sure your lawyer is comfortable with different styles of negotiation. Specific knowledge of the partner is paramount.

Sorry, the comment form is closed at this time.