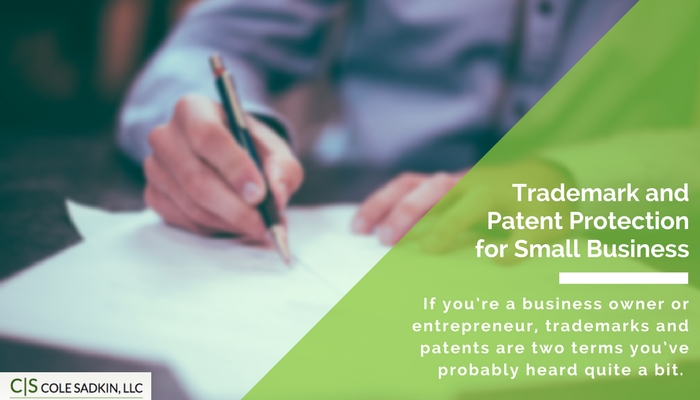 If you’re a business owner or entrepreneur, trademarks and patents are two terms you’ve probably heard quite a bit. Many people hear these terms and just assume their definitions are interchangeable. They’re each designed to protect a company’s intellectual property — easy enough, right? Not quite. When it comes to trademarks and patents, many don’t realize that each protect a very different aspect of a company. If you accidentally use a patent to protect your brand, you may not actually have any protection at all.  Let’s discuss the difference between trademarks and patents and get guidance regarding how they provide benefit.

Trademarks protect the brand of a company’s identity. Specifically, trademarks protect the ability for a company’s name or logo to be uniquely attached to the identity the company is promoting. If major companies like Nike or McDonald’s failed to secure a trademark, then you would see golden arches and swooshes on restaurants and shoes everywhere. Without acquiring a trademark, companies are vulnerable to having their brand identity stolen.

Imagine starting your own restaurant called Hank’s Seafood. As the owner you’ve built the restaurant from nothing, serving fantastic food with unbelievable service. This ends up paying dividends based on 5 star Yelp and Google reviews. However, you notice another competitor pop up in a similar area of town, with an identical logo, called Hank’s. If you failed to secure a trademark for your logo and name, this should be cause for major concern. Legally, the competitor is doing nothing wrong – no trademark means they have the ability to take your name and logo, which could potentially steal customers based on name recognition alone.  If Fake Hank’s is forward-thinking, they actually have the ability to trademark the name and logo themselves, and then possibly sue you.

Patents protect an entrepreneur or business owner’s specific designs and inventions. This is particularly important when it comes to new inventions. If you’re creating a new application that is the next Uber for Cats – we’ll call it iPaws – you want to ensure that a major company doesn’t take your idea and launch a similar app right before you… the iCat for instance. When it comes to inventions, being first to market is huge.

New inventions are a bit complicated because a patent has the ability to protect an idea without the actual finished product – however when applying for a patent, you should have specific details or specs about your potential project. The more specific the details, the better. Very vague ideas usually don’t receive patents. If patents were given out too easily, competition would be diluted by “inventors” who could simply think of ideas all day, and sue real inventors for infringement, just to make a quick buck. So if you want to release iPaws – then hire a developer, build the specs, and get a patent – don’t just sit there and sue Apple once the iCat is released.

For either trademarks or patents, we can’t stress enough the importance of speaking with an intellectual property attorney before launching. If you notice another company with an eerily similar logo, or an invention that mimics yours – then contact your attorney! They work for you – they will take the appropriate steps to secure your company’s identity.