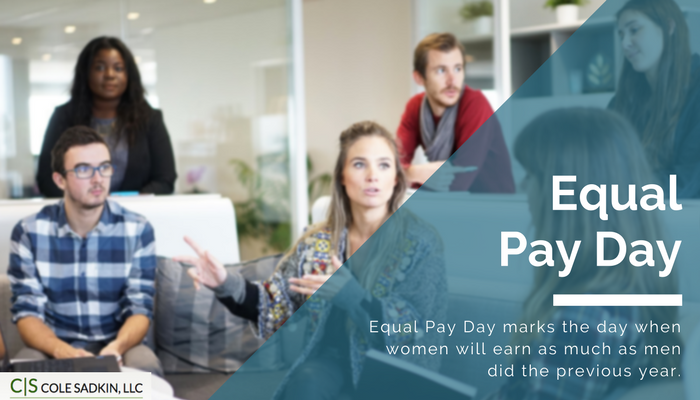 Posted at 14:14h in Uncategorized by Cole Sadkin 0 Comments
0 Likes

Each year, Equal Pay Day marks the day when women will earn as much as men did the previous year. This year, that day is April 4. While there was advancement from Equal Pay Day being held on April 12 of 2016, the sizeable divide in pay still lingers. The National Committee on Pay Equality created Equal Pay Day in 1996, and while women earn $.38 more than they did when the Equal Pay Act was enacted, the gap still remains today. In 2016, studies showed that women make $.79 for every dollar a man makes.

When the Equal Pay Act was signed into effect in 1963, women earned roughly $.59 cents for every dollar a man earned. Today, women earn about 80 percent of what their male equivalents earn. This federal Act mandates that men and women in the same workplace earn equal pay for equal work, and this is determined by several factors: skill, effort, responsibility, working conditions, and establishment. While great strides have been made, the pay gap still exists today between 78 and 82 cents on the dollar. Equal Pay Day is one way to bring awareness to the inequality.

In 2009, Barack Obama signed the Lilly Ledbetter Fair Pay Act which extended the rights to file for pay discrimination lawsuits to 180 days after each individual paycheck rather than from the original pay decision. The Lilly Ledbetter case led to the new act when her discriminatory complaint was time-barred due to it being filed beyond the 180-days. Employers must continuously monitor their wages to ensure they remain consistent and fair as time progresses.

While the federal level struggles with finding a way to end pay inequality, states are taking it upon themselves to advance equality. California’s Fair Pay Act is among the most aggressive state-level fair pay laws. Under their law, employees may compare their earnings to employees of another company as long as the work performed is substantially similar. Furthermore, California requires employers to justify pay gap and restricts the reasons a company can list to explain the difference in pay.

There are many conversations discussing why the gender pay divide still exists today, and continuing the conversation towards a solution is one of the best ways to bring equality to the workplace. One way businesses can be more conscious of fair pay is to conduct salary audits to monitor and address potential gender-based wage gaps. Despite the progress America has made towards decreasing the wage gap, it still exists. Attorneys can help address inequality in the workplace for employees and assist businesses in building good practices to prevent any discriminatory complications from arising.